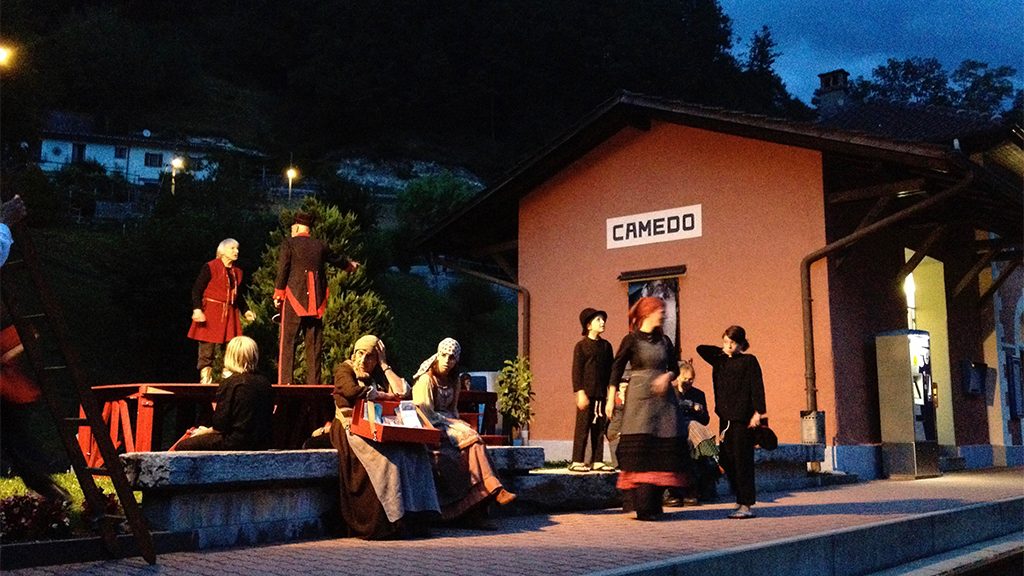 The song of the valley – PREMIÈRE

A theatrical journey through the Centovalli.

Coming home, for Mauro, means to return to the valley, to an other time. It will also be his last trip to Camedo. He will sell the house of his grandmother and tear down all bridges to the past. But in the valley of thousand valleys, reality, magic, memories und poetry weave into each other. Mauros journey transforms into a ride to other realities. Spirits of the valley, mythical creatures, fantastical beings, memories arise. All assemble in an effort to convince Mauro to not bargain with his indentity. Where will this adventure, between songs, dances, fears, agressions, melancholy, lead …?

Our theatrical journey will begin in Verscio. It is from here that the public, with the actors and the “Bandella” will depart on their ride up the valley. In Intragna, Coracapolo, Verdasio, Cadanza and Camedo the train station and its surrounding will become the stages for our story. Arrived in Camedo we will invite to the big feast: an intriguing finale scene concluding with a delicious traditinal meal, accompanied with wine and music.

Use public transport to avoid parking problems. At the end of the event, the train will return from Camedo to Locarno, stopping at all the stations on request.

EXECUTION / CONDITIONS
The performances take place in all weathers.
Should a performance nevertheless have to be cancelled for safety reasons, it is considered to have been played after 45 minutes. There is no entitlement to a refund or replacement ticket.
You will be informed about the performance on our website on the day of the performance.
+ Google Calendar+ iCal Export
BY INVITATION ONLY