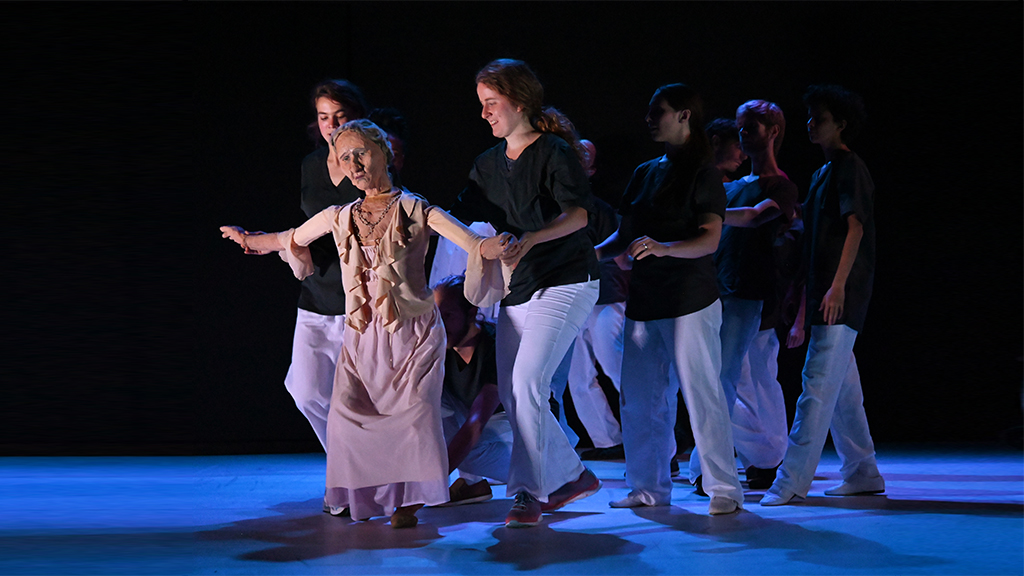 It is estimated that people with dementia currently reach 146,500 in Switzerland alone while there are 31,375 new cases each year, or one new case every 17 minutes. 66 percent are female, while 5 percent (about 7,600 cases) become ill before the age of 65.
It is assumed that by 2050 about 315,400 people will have dementia, age being the major risk factor.
In nursing homes in large Swiss cities, more than two-thirds of patients suffer from advanced dementia: often due to a stroke, or Parkinson’s disease or, in the vast majority of cases, Alzheimer’s disease.

The “Termini Station” theater project addresses the neurological distress of these patients, which is also inflicted on their relatives and caregivers.

The play
Each year, under the direction of a professional director, Dimitri Academy creates a new end-of-training work from the Bachelor in Arts of Theatre, intended to be taken on tour. Directing 2022 features the signature work of award-winning director Volker Hesse.
True to his practice of theater rooted in contemporary reality, Volker Hesse invites the viewer to walk the corridors of an imaginary clinic populated by Alzheimer’s patients.
The scenic elements are inspired by stories and notes written by Zurich gerontologist psychiatrist Christoph Held and some of his books, including ” Wird heute ein guter Tag sein?
Sharing the daily lives of patients, Held reminds us that there is still much to be done to transform society’s view of them:
“Not so long ago, the image of dementia patients in nursing homes was exclusively characterized by decay and emptiness. This is evidenced by the titles of books that appeared until 1991, such as Robert T. Woods’ book: Alzheimers Disease Coping with a Living Death. While it is true that these people lose their mental abilities as time passes, they nevertheless remain, even in advanced disease , extremely receptive and even hypersensitive to the moods of their surroundings. No one today would think of calling them “living dead,” yet encounters with dementia patients can still cause great anxiety. Many feel threatened by something mysterious that defies their logic and fear that they will no longer be able to think in an orderly way.” Christoph Held
A stream of stories and destinies, a chaotic maelstrom that makes us experience the different people in an imaginary dementia clinic. With much sensitivity and delicacy, the narratives and testimonies become theater.
This artistic production aims to pay tribute to the patients, caregivers and family members through the expressive means of the body, voice and emotions.
Scenes captured in an imaginary clinic:
Caregivers in a night corridor, listening to the sounds and noises coming from the darkness: scratching, gasping, moaning, whimpering, screaming… Young caregivers show signs of exhaustion.
Meal preparation. The “residents” are brought into the dining hall. Sudden resistance, refusal to feed. Anger and chaos.
Reassuring physical contact between residents and caregivers. Elderly bodies are cradled, tenderness and calmness prevail. These are dreamlike moments. Nurses use humor: clowning, dancing together, folk songs, rhythmic games.